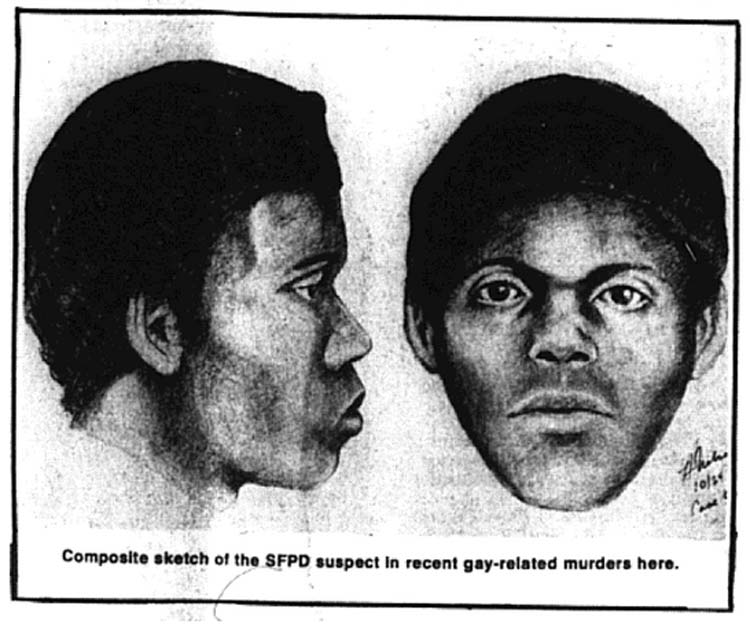 In San Francisco, during the 1970s the gay community was fearful for their lives. For more than a year a serial killer had murdered at least 14 people and attacked 3 gay men. He hadn’t been caught yet so everyone was terrified that he would hurt them next.

Between January 1974 and September of the next year the mysterious killer, who was given the name Doodler, targeted and sketched the people he was planning to kill in bars, restaurants, and gay nightclubs.

A dead body of a 49-year-old Canadian-American man named Gerald Cavanaugh was found lying on Ocean Beach in San Francisco. He was considered Doodler’s first murder and Cavanaugh tried to get away before his killer stabbed him. Another man, Klaus Christmann was found on July 7, 1974, and he was killed much the same way. Even though Christmann was married with children people believe he was secretly a gay man. Going forward all of the people Doodler killed shared the similarity of being gay and were also murdered the same way.

Investigators found a person of interest who may have been the killer, but the suspect was never publicly revealed or convicted of anything. Eerily enough the man who was arrested was very cooperative and did not feel guilty about the murders. Unfortunately, the survivors were too terrified to come forward by testifying in court. Investigators thought he was the killer but due to the survivors not wanting to speak up in court he was never convicted.

Harvey Milk, an LGBT activist, explained that the survivors did not want to be made fun of by family and friends if they admitted they were gay. Today there are many questions about the Doodler case that has yet to be solved. It’s strange that the identity of the Doodler suspect was never revealed and after four decades of investigating the murders, the case has run cold. It’s scary to think that the Black Doodler is still on the loose…