At he beginning of June, Jeremy Sutcliffe came to the aid of his wife, Jennifer, when she called out in the backyard. She had startled a huge rattlesnake, and later, she told her husband she had almost touched the snake while she was focused on gardening. In her words, “I reached down to pull a clump of grass that was growing by one of my flowers — and I almost grabbed a rattlesnake.”

Jeremy attacked the snake, severing its head from its body. Leaving it alone for 10 minutes, he assumed the snake would be okay to dispose of. But when he reached down to move it, the snake’s head bit the man in two places on his hand. It took an emergency trip to the hospital, more than twenty (20!) doses of antivenom, and a medically induced coma to save his life! Luckily Jeremy survived, but he almost didn’t make it. In total, he received 26 doses of antivenom when the standard dosage is typically only two to four.

So what is the moral of this story? First, never assume that a snake is okay to handle, even if the body is in two pieces. But more importantly, be observant and know how to identify a snake, on sight. Proper medical treatment of snake bite injuries varies depending on what kind of serpent was involved. Make sure you or your loved ones have the best chance of surviving such a crisis, and, better yet, the best chance to avoid a snakebite in the first place: Learn to ID venomous snakes! Educate yourself about snakes in your area and in other parts in the U.S. and the world and you’ll be prepared if you encounter one.

In the anxious seconds after a crisis, you may be called upon to give health or rescue professionals details to help them save a life.

If you know how to identify a snake by its behavior, appearance, and range, you’ll also be less likely to get bit. Recognizing a dangerous snake gives you time to move away from it and warn other people to stay away from it as well. If you know where its habitat is you can try your best to stay clear of those areas, especially when they tend to come out and sunbathe, which, for most snakes is typically in the morning.

Take a look at the picture above, of a leafy patch of ground. Even though we have highlighted the area where a snake is, most people would never spot it. Camouflage patterns and other characteristic traits will help you tell one type of snake from another. We’ll go over these distinctive features of venomous species in our list so you’ll be able to spot which type you’re dealing with instantly.

Some of you will have not only spotted the snake in that photo, but identified this relatively common snake as a Copperhead, the first venomous snake on our list: 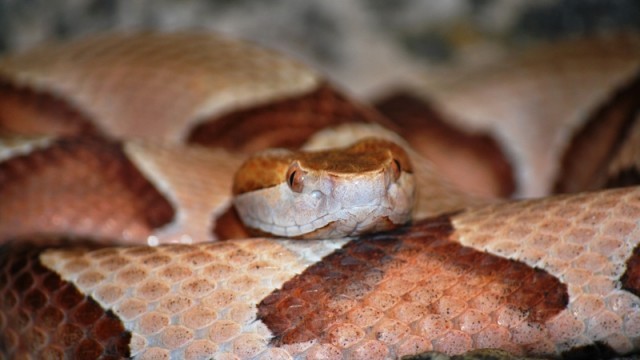 Adult copperheads are usually about 2-3 feet long. They perfer rocky ledges and other places where they can lie in the sun during summertime, although they are nocturnal, they still tend to situate themselves in the open, often in areas with dry leaves that suit their camouflage pattern.

That means, beware these snakes’ presence when you or your family are walking through dry leaves. They can be almost impossible to spot if they remain still.

Their venom may not be as deadly as some of the other serpents on our list, but do not underestimate the copperhead. Their venom can still be deadly.

The next snake on our list has much stronger venom: