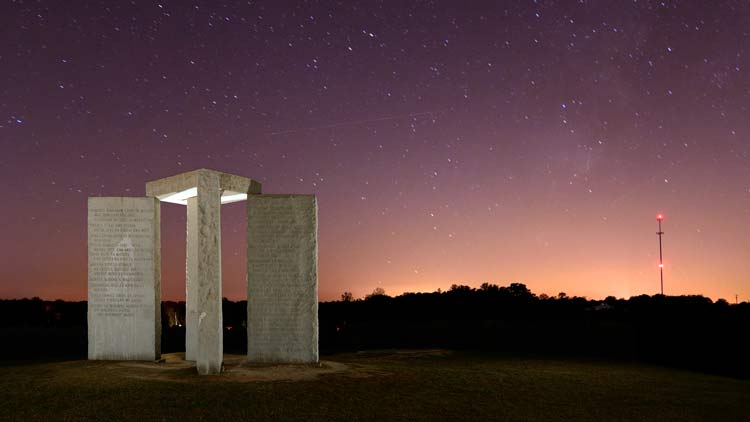 The Georgia Guidestones is a mysterious monument sometimes referred to as the “American Stonehenge”. It is a granite monument in Elbert County, Georgia. It has been there since 1979 and the stones are engraved in eight languages – Spanish, English, Hebrew, Swahili, Chinese, Arabic, Hindi, and Russian, Each relays 10 “new” commandments for “an Age of Reason.” The reason the monument exists is a mystery and the only clues that may point to its origin are located on a plaque on the ground. It provides the dimensions and explains the holes and notches that correspond to the movements of the stars and sun.

In June 1979 a man who introduced himself as Robert C. Christian appeared in Elberton and claimed to represent some “loyal Americans” who had been planning the installation of a large monument. He approached Joe Fendley, president of Elberton Granite and asked for stones larger than what had ever been quarried in the county and he also wanted them cut, finished, and assembled. Christian also explained to the president that the monument would serve as a calendar, compass, and clock. He wanted it to be able to withstand catastrophic events, so that if anyone was left after the disaster they would be able to use the guide to start a new and better society.

Before it was even complete, the monument ignited controversy. Rumors began that the Elberton Granite company president and his banker friend were behind the whole thing and the rumors got so bad that both of the men agreed to take a lie detector test. After they passed, folks still said they were doing the devil’s work and even a local minister predicted that occult groups would come to the Guidestones to do sacrifices.

After the stones were complete, Christian stayed in touch with Fendley and even met up with him whenever he was near the area. Meanwhile, after the monument was built, visitors flocked to the site and continued to come. After several investigations, no one could come up with the true identity of R. C. Christian.

Out of the 10 commandments on the stones, the first one is the most haunting and controversial, as it claims that we must keep humanity under 500,000 people to maintain a balance with nature. Many believe the commandment is a license to keep the human population at 500,000 and because of that, critics have requested the stones be destroyed. Some theorists consider the stones to be calling for a new world order designed for a Luciferian secret society. Whatever the case may be, the stones still reside there today and people continue to come up with more reasons as to why the monument was constructed.

Just like the stones will forever remain a mystery, so will many unsolved murders. The next on our list is such a case, and it’s scary one at that…